Long ago, before the dawn of the Age of Facebook, a tiny online community for South Asian writers turned up among the pages of an ancient and forgotten virtual land called Orkut. As more and more people fond of the written word learned of this community, its membership grew, and soon thousands had joined the tribe and partaken in its goings-on. In 2006, this tribe of gifted wordsmiths formed its own homeland on the web, where the critique of peers was given and received freely, lively conversation was made, and fast friendships were formed. Thus was born Desi Writers’ Lounge (DWL).

Since those ancient times, DWL has come a long way. Publication of an online literary magazine, called Papercuts, began in 2007. Six years later, the magazine went into print. An annual short story competition was founded. Writing workshops were offered online and offline. An international network of Readers’ Clubs was set up. Events were held. Stalls displaying DWL merchandise were set up at international literature festivals.

Today, DWL stands as an established platform and workshop for aspiring South Asian writers and Papercuts is known for the versatility and accessibility of its content.

The team behind this amazing project continues to grow and to this day volunteers its services entirely for free.

Get your work critiqued by a community of your peers on the DWL Workshop forums. Make sure you send in a great writing sample!

Connect with us for our latest updates.

We welcome meaningful feedback. See anything that's making you want to get in touch? Got a question?

The Workshop is DWL’s signature space for dialogue, inspiration and constructive critique.

Designed as a collaborative forum, the Workshop allows members to post their writings, interact with fellow writers and receive detailed feedback on their work from other members.

For writers not looking for critique, the Workshop offers sections where writers can simply share their work. Our regular columns provide writing prompts for the writer who is feeling inspired. Members also get access to writing resources and tips for getting published.

So, join the fun. Be heard and be inspired.

Not a member? Register here 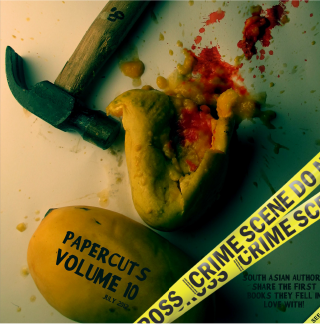 Papercuts is DWL’s biannual magazine. It features the best stories and poems from the DWL Workshop as well as pieces submitted directly from writers all over the world.

Our Blog chronicles DWL’s activities and initiatives, and important literary happenings from around the world. It's also your one-stop shop for book reviews, interviews, quizzes, reading recommendations and interesting insights into South Asian publishing.

Ranging from the personal to the professional, the DWL blog presents a diverse array of ideas buzzing on the literary scene. The blog is compiled from posts written by guest writers, DWL members and the Papercuts editorial team.

Check it out and send us your own blog entries on literature and writing.

Desi Writers' Lounge is always on the look-out for talented writers to encourage and promote. Our annual short story competition, which started in 2012, aims to unearth new talent in fiction from all around the world.

No, it doesn't matter how much of a creative genius you are. Read the competition guidelines before you send your story in!

The Dastaan Award is an annual PKR 50,000 prize for one winner of DWL's short story contest. Click to read more details about the Award.

Three winners are selected for each DWL annual short story competition. Click to find out more about the winners and read their winning stories.

DWL offers paid courses online and offline for poets and writers who are serious about developing their writing skills. Courses vary in topic and schedule according to availability of qualified instructors, so keep checking to see if something suits your requirements.